A small but dedicated bunch of men women and children (plus a “parrot” – centre of photo behind cake) turned up to celebrate the 10th Aniversary of Men’s Centre North Shore. Several super-heroes were in attendance. Jack Lioneagle’s protest songs were played loudly, Speights was sunk and cake was eaten.

The evening’s most enthusiastically received toast was “that in another 10 years the Men’s Centre would be redundant”. 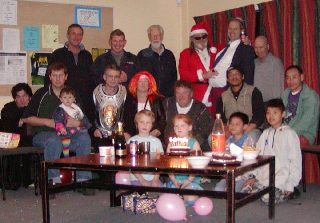