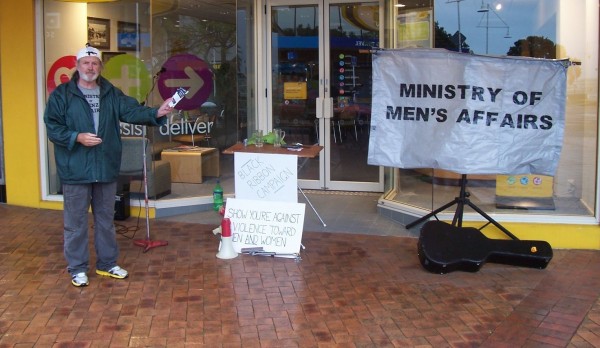 Representatives of the Ministry of Men’s Affairs have campaigned each Saturday in October handing out leaflets, badges and sensible gender politics. So far we have campaigned in Manurewa, Tauranga and K Road Auckland.

Responses from the public have mostly been very supportive with quite a few people stopping to express support or to tell us accounts of distressing suicides, false allegations or having their children’s lives wrecked under under NZ family law. As expected some people still found it surprising to hear anyone stick up for men or the idea that true gender equality requires anything other than improving women’s situation. Some men ignored us (I suspect some thought the word ‘Ministry’ meant we were a religious group), some men accompanying women said their partner would never allow them to support this cause, and some women when realizing our cause would turn their noses up in disgust, but only a couple of people responded with any overt disagreement.

One woman on K Road said she had previously served in the armed forces and took exception to my statement that men suffer almost 100% of workplace deaths in NZ year after year. She very aggressively accused me of claiming that female soldiers weren’t prepared to give their lives, which of course I hadn’t said at all. (Although I should probably have mentioned that the proof of the pudding is in the tasting, and in fact only one female has ever died in our military services and that was the medic in Afghanistan 2 months ago when a vehicle she was in detonated a roadside bomb. I don’t know how many men have died in our military since women demanded and received the right to equal conscription and pay, but 9 men have been killed in Afghanistan alone.)

The turnout to these campaign events has been disappointing. Only a few stalwarts turned up and we had not one visit (at least until after the event!) from MENZ Issues contributors or other recognized faces. Really people, if you imagine that simply complaining on web blogs is going to change anything you’re sadly mistaken! But you still have one opportunity to support the campaign with your presence at Garden Place in the middle of Hamilton city tomorrow, Saturday 27 October, between about 10am and 2pm. And of course you can also provide support with a donation to Kiwibank 38-9008-0274760-00. This will help to offset the cost of materials including these smart badges: 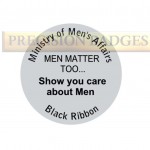 The Ministry of Men’s Affairs through the Black Ribbon Campaign encourages people to show they are against violence towards BOTH MEN AND WOMEN. It encourages people to show they care about men and to recognize that although feminism has commendably improved or overcome many historical female disadvantages, for men their historical disadvantages have not been addressed at all and many new layers of disadvantage have been added.