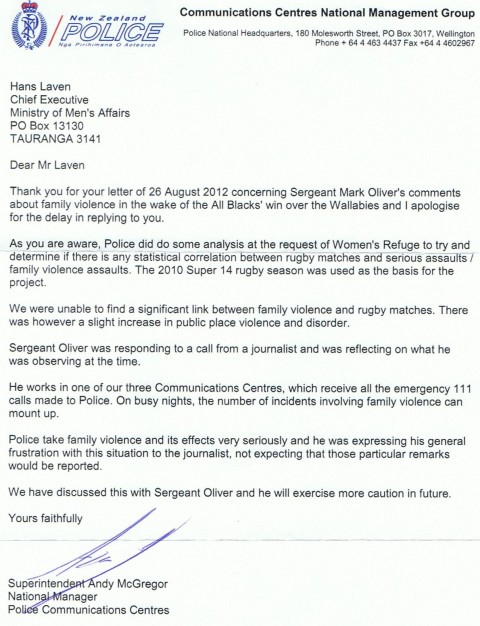 The Ministry of Men’s Affairs recently challenged the NZ police for making a public claim that domestic violence call outs had increased during an All Blacks match. The police have finally responded acknowledging that they had not been able to find any significant link between family violence and rugby matches.

Note that the NZ Police conducted “some analyis at the request of Women’s Refuge” to see if there had been any correlation between the 2010 Super 14 rugby season and serious assaults or family violence assaults. No link was found. Women’s Refuge will be aware of this finding so any further silly claims by them disparaging good men who follow sports can fairly be challenged as deliberate falsehood.

The sergeant who forwarded the ‘Superbowl myth’ claim about NZ rugby has been told to exercise more caution in future statements, and hopefully police nationwide will also take more care not to parrot feminist false propaganda. However, the issue is a much deeper cancer in that police continue to carry into their role highly manipulated beliefs about gender, violence and other wongdoing.

For example, it’s concerning that NZ Police would be using its resources to carry out research on behalf of Women’s Refuge, a highly political and socially destructive organization. Would NZ Police carry out research at the request of any men’s organisation? I doubt it. The fact is that NZ Police are too close to Women’s Refuge and other feminist groups all over NZ but there is no relationship with men’s groups. Just like the Family Court, CYFS and other government agencies.

The Ministry of Men’s Affairs issued the following media release last weekend. It’s sad but predictable that not one news outlet picked the story up. These are the same editors and journalists who have published numerous statements made by ill-informed others claiming increases in domestic violence associated with sports matches. These media have been happy to spread untruths but show no interest in correcting them or in ensuring the public gets realistic information about domestic violence.

Police have admitted that the public statement made by a sergeant in the Central Police District claiming an increase in domestic violence on the night of an All Blacks match was wrong.

National Manager of Police Communications Superintendent Andy McGregor has now admitted there was no basis for these claims and promised that the sergeant would exercise more caution in future. A recent study conducted by the NZ Police at the request of Women’s Refuge found there was no correlation between rugby matches and family violence.

CEO for the Ministry of Men’s Affairs, Hans Laven, said the idea that domestic violence increased after men watched big sports events was based on the US Super Bowl myth. “The myth was deliberately started in 1993 by a California feminist lawyer who made up a story that there was university research showing such violence. Her unfounded claim spread like wildfire. There was even a media advisory before the next Super Bowl game warning women “Don’t remain at home with him during the game”.

Mr Laven said that although the femiinist lawyer’s claimed research was soon exposed as a lie, the myth was still believed by many people to the present day. “Studies internationally have failed to show any correlation between sports events and domestic violence aside from the effects of increased alcohol consumption during any public holiday or community event. Also, there is no evidence that domestic violence changes when the home team loses or wins. This myth is one small part of a huge amount of false information against men that has been spread during the feminist era. We would like to see organisations such as Women’s Refuge and the Ministry of Women’s Affairs face up to the damage that has been caused by such misinformation and to make some restorative moves.”

Mr Laven added “We commend NZ Police for having the integrity to admit their sergeant’s error. We respect police who frequently put their own safety at risk to protect the community and we understand the sergeant had good intentions. But like any problem domestic violence will not be solved through false beliefs about its causes.”
END