Men on Strike – Why Men are Boycotting Marriage, Fatherhood and the American Dream, and Why it Matters. By Helen Smith PhD.

Although this new book about men is written by a woman, she clearly likes men, and listens to what men say, both socially and professionally in her practice as a psychologist. She also runs aÃ‚Â  men’s rights blog, so she is well informed about contemporary male attitudes. 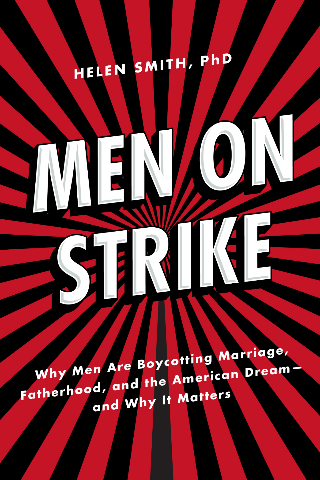 The first chapter is available online for free, and gives a good outline of the current cultural climate around gender in America, and briefly reviews some of the recent books on the subject. This is one aspect of her book that I think is particularly valuable; most of the influential writers that have dealt with men’s issues over the years get a mention. If someone is unfamiliar with this body of work, Men on Strike would be a good place to start.

The book is American-centric, so there is not much direct mention of writers in other countries, let alone New Zealand. The resources at the end of tne book are also sadly lacking in this regard. However, most of the subjects she discusses will nonetheless be very familiar to NZ readers.

Many commentators attribute the alarming drop in numbers of men in higher education and in availability for marriage to a deficiency in the men themselves. Helen Smith makes a strong case that this is an entirely rational response by men who are aware of the hostile social and legal conditions they are likely to face. She calls this response “going Galt”, referring to the lead character in Anne Rand’s novel “Atlas Shrugged”. MENZ readers will probably be more familiar with the term MGTOW (men going their own way), which describes the same phenomenon.

I found the section on paternity fraud particularly interesting, and the issue of “sperm theft” was a bit of an eye-opener. She advises young men to make sure they not only use condoms carefully, but to take care they dispose of them themselves. I’m sure glad that this is not a situation I will ever have to worry about again!

In the final chapter, Smith outlines her ideas about what men (and sympathetic women) can do to help change the situation. For example:

Stop being silent. Silence leaves issues of sexuality and reproduction to be decided by woman and Uncle Tims and the white knights who support them.

She advises men to set boundries with their girlfriends as soon as possible, to get active politically, and boycott companies which promote and support the anti-male agenda. Most useful of all in my opinion is her advice to reclaim male space; to both support and get support from other men.

My main criticism of this work is that at more than $30 for a downloaded e-book it seems extremely expensive, especially for just over 200 pages. If you have a son or grandson who needs a wake-up call however, it might just be an extremely good investment.