Yesterday my wife Felicity and I visited one of our long time heroines Erin Pizzey at her home in Twickenham. Erin is famous for founding the world’s first Women’s Refuge back in 1971. The movement she started was subsequently hijacked by militant radical feminists with a Marxist agenda.

She was subject to villification and even death threats after she published her book Prone to Violence (now out-or-print but available online here), which revealed that most of the women entering her refuge were equally as violent or more violent than their husbands. 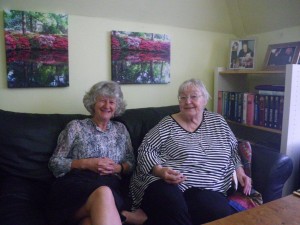 Our discussion traversed a wide range of subjects, and when we left I was surprised that three hours had flashed past. I was expecting to meet an elderly woman on the verge of retirement, but although she has some physical health issues, she is still actively working to help women and children, busy writing and publishing books, and heavily involved in social activism.

Erin’s experience is that many women actively seek out and initiate abusive relationships. She sees this behaviour as an addiction, caused by neurochemicals (particularly Oxytocin) that they become habituated to during their own abusive childhoods.

Her research suggests that over 60% of supposedly victimised women are largely responsible for their own abuse, and that less than 40% can accurately be described as “battered women”, ie: unwilling victims of violent men.

I have read feminist articles applying this label to men, but have not really considered women’s behaviour in this light. Erin suggested that if I encounter men in abusive relationships, I should direct them to this article: Working with violent women. Erin notes that men can also be family terrorists, but that male violence is more likely to be explosive and physical.

The terrorist is the family member whose moods reign supreme in the family, whose whims and actions determine the emotional climate of the household. In this setting, the terrorist could be described as the family tyrant, for within the family, this individual maintains the control and power over the other members’ emotions. The family well may be characterized as violent, incestuous, dysfunctional, and unhappy, but it is the terrorist or tyrant who is primarily responsible for initiating conflict, imposing histrionic outbursts upon otherwise calm situations, or (more subtly and invisibly) quietly manipulating other family members into uproar through guilt, cunning taunts, and barely perceptive provocations.

(The quiet manipulative terrorist usually is the most undetected terrorist. Through the subtle creation of perpetual turmoil, this terrorist may virtually drive other family members to alcoholism, to drug-addiction, to explosive behavior, to suicide. The other family members, therefore, are often misperceived as the “family problem’ and the hidden terrorist as the saintly woman who “puts up with it all.’)

There are significant implications for those of us who work supporting separating men. Based on my personal experience of a relatively amicable divorce, I have tended to advise men to take a softly, softly approach, to avoid confrontation whenever possible, and to be flexible and accommodating.

These are probably a good tactics with a psychologically normal woman, but counter-productive when dealing with a family terrorist. According to Erin:

There has been some discussion of this subject on MENZ recently, but Felicity and I were both surprised that in Erin’s experience mothers sexually abuse their children at similar rates to fathers. This subject is of course pretty much taboo in the research community, so almost nothing has been published.

Single mothers who are unable to maintain relationships with adult men due to their own abused childhoods, apparently often admit (when questioned) to using their sons as surrogate sex partners. I was aware that many of these women commit “emotional incest” by inappropriately relating to their children as partners and friends instead of as a parent, but I have always assumed that most overtly sexual abuse would be by men.

Erin has worked with families where teenage boys regularly sleep in the same bed with their mothers, and encountered boys who continue to breast-feed up to and beyond school age. One woman confessed that the only time she ever orgasmed was when breast-feeding her son.

A significant amount of abuse is apparently via fingers in the anus, and there are cases where the inappropriate use of suppositories (supposedly for constipation), results in boys needing medical attention. This is something else I have not heard about before.

I remind readers that this is only anecdotal evidence, and it is important to remember: the plural of anecdote is not ‘data’. Clearly this is an area where solid research is desperately required. What it does suggest is that the feminist project of removing fathers from families is going to increase the numbers of abused and dysfunctional children.

Felicity and I remarked that we were surprised we had not seen as much poverty as we had expected. Erin’s response was that we have not yet visited the right/wrong part of town, and suggested we take a trip to Brixton. There are huge housing estates filled with single mothers and their children in council flats, where they are preyed on and abused by violent young men.

I’ve just read in the Daily Mail that the Institute of Public Policy Research estimates there are 640,000 NEETS (Not in Education, Employment or Training) between the ages of 16 and 24 who have never had a job, despite the fact that there are over half a million job vacancies. These young people are basically unemployable, because they do not have the social or practical skills to be of any use to an employer.

We asked whether Erin knows of any positive projects with regard to breaking the cycle of family dysfunction, and she drew our attention to work by Camila Batmanghelidjh, the chief executive of an organisation called Kids Company. This article in The Independant: How a deprived childhood leaves its mark on the brain describes research that is looking at which bits of abused children’s brains are overactive and which are under-used. Batmanghelidjh…

commissioned the research after noticing that many of the most troubled young people actually calmed themselves by committing violent acts. She believes that this paradoxical effect may be a learnt pattern of behaviour which children adopt to help them deal with their own experiences as victims of violence.

“At the moment, the most violent children are described as criminals and dealt with in custody. But custody has a 80 per cent reoffending rate – the system is not working.”

The future of Radical Feminism

I asked Erin if the radical feminist movement is still influenced by a Marxist agenda, and if she thinks that it is still supported by Russia and/or other communist countries. She believes not, and that it now has it’s own momentum fuelled by vast amounts of taxpayer funding, and easy access to power and privilege.

She considers that for most women, feminism was a “Trojan Horse”, and that the promise that women could “have it all” has proved without foundation for all except the feminist elite.

We discussed the fact that many of these radical feminists are now nearing retirement age, and that most younger women do not seem to share their values. Large numbers of normal, hetro-sexual women are now unable to find partners; if the males in their community are not dysfunctional, imprisoned or gay, they know that they can get all the sex they want by dating, without needing any long-term commitment. Perhaps there is some cause for optimism?

Erin has always supported family-friendly men’s groups, and believes they are finally gaining traction. She particulary recommends the website A Voice for Men, where she is a regular contributor. She learned many years ago that men are nowhere near as good as women at working collectively; when she first set up a refuge for men the clients all retreated into their own rooms and shut the door. Women instinctively reach out to others for support when they are vulnerable; men seem more inclined to find a cave and lick their wounds in private.

I believe this is something men should work hard to change.

I apologise for such a long, rambling, unfocused post, but I wanted to share our fascinating conversation while it was still fresh in my mind. I hope that some day Erin will make it to NZ so that she can speak about some of these subjects publicly.

5 Responses to “Visit with Erin Pizzey”