Get your Stomping Boots on 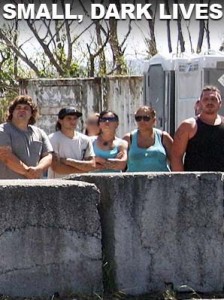 This is the image and caption that appeared on the Stuff News website to front a Rosemary McLeod opinion piece on the killing of Glen Jones, the disabled Featherston man, attacked and killed by a vigilante group.

Rosemary McLeod can always be relied upon to defend the feminist cause by isolating and illuminating any woman who behaves in a manner likely to shame the elevated position of the female gender she holds so dear.

Centre piece, amongst her historical romancing of Featherston and critique of this drug addled, small-town evil community (allegedly indicative of rural NZ) is her trademark elevation of a condemned woman.

His killers, one of whom put on her “stomping boots” for the event, await sentencing.

This poetic demonisation of the ‘woman in the group’ appeals not only to a broad spectrum of the sisterhood, soothing the rasped sensitivities of the aggrieved hierarchy (let down by the behaviour of one of the sisters) to the feminasty sympathisers (railing in support of the downtrodden), but also to a social appetite for women to be seen to be held equally accountable.

So, not something you would expect to find in the big city?

Well, a gaggle of the big sisters got their stomping boots out this week when Brenda Pilott (National Secretary of the PSA) and Suzanne Snively (MOREMEDIA ENTERPRISES LIMITED) teamed up to engineer more bogus domestic-violence media-drivel in support of female superiority.

Unreformed Woman’s Refuge workers like Brenda Pilott expect these things to go unnoticed – and you can well understand why she might have thought it would go unnoticed, easily owning the expectation that the media would not embarrass one of their own – Snively is the minor shareholder in long-standing media personality Ian Fraser’s media company.

These small dark lives are in essence no different to ‘the woman in stomping boots’ held aloft in McLeod’s article.

Where the difference lies is not between rural and urban communities but in the numbers that need to be informed – it comes down to the veracity of the media – to shine a light in dark places.

‘The research’ is not research, it is a document designed for a purpose:

These behaviours need to be supported, so that the woman is has optimal
opportunities to engage with systems that will help hold the abuser accountable, and
help her deal with the long term consequences of abuse, thus becoming a more
productive employee.

To vilify men, make then guilty by association with words, to ‘kill off’ their ability to defend themselves within the work environment and allow vigilante groups to operate within the workplace. It’s the same village hysteria rising in the big city and paid for, supposedly by the membership fees of union members who want workplace representation.

I was lost for words when I tackled PSA President Mike Tana about the situation – he responded like a blindsided fool defending a report he hadn’t read or understood – saying, that there was no intention to discriminate and;

The report was commissioned (by the PSA) for use by all NZders.

When we see this vigilante attitude rising within our social systems, people should be held to account, even if Suzanne Snively ONZM was Wellingtonian of the year 2013.

When we see the largest workers union in New Zealand (58,000 members)being highjacked by its National Secretary Brenda Pigott, the media has a responsibility if non other than to inform taxpayers what is happening within the ranks of government agencies.

Small dark lives, evil, and stomping boots are just as easily found in the Capital as they are in small-town New Zealand, but you won’t see Rosemary McLeod writing about that anytime soon.

Of all the titles a woman can earn in this land of female superiority – governor-general, prime minister, chief justice – surely the most delightful is Staunchest Pitbull. I covet it.
(Rosemary Mcleod 2006)