Judith Collins Shows that Violence Towards Men is OK

This article is about our Judith Collins who will be paid by taxpayers to attend a celebrity-headed summit on ‘ending sexual violence in conflict’. Maybe that’s ok though it probably isn’t a good investment of NZ taxes. But the really objectionable thing about the article is the picture showing both Angelina Jolie and a smiling 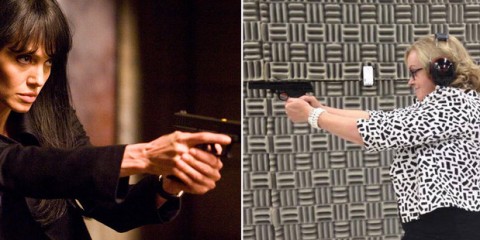 Judith Collins pointing a gun with the implication that it is against a sexual aggressor. The message is “Women, if you think a male might be a sexual aggressor it’s ok, in fact recommended, that you shoot him”. Remember, ‘sexual violence’ is so broadly defined as to include any unwanted touch no matter how trivial, and it can include trying to hold the hand of someone you hope might be interested in sexual intimacy. Yeah, go girls! Men deserve everything they get, don’t they Judith?