A female paedophile has been jailed for having sex with an eight-year-old boy more than fifty times.

Loren Morris, 21, started sleeping with the boy five years ago
She continued doing it for two years, until the boy was ten
She was convicted of sexual intercourse with a child last month
Today she was given the two-year sentence at Worcester Crown Court 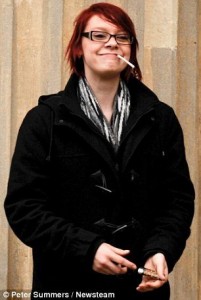 The judge in the case told Morris that he would be lenient with the sentence – which will see her released from jail after one year – because she ‘realised it was wrong’ and stopped having sex with the boy.

His batteries must have gone flat.

Judge Robert Juckes QC said: ‘I make no secret of the fact your case has given me cause for much consideration.

‘I have come to the conclusion that due to the concern and embarrassment caused to both you and your family that you will not be offending again, let alone committing sexual offences.

Defence lawyer Antonie Mullers had told the court Morris was struggling to accept the facts of the case, and asked Judge Juckes to spare her a prison sentence altogether.

Didn’t we have a case where a female teacher had sex with a pupil and when it was found out the teacher committed suicide – that’s right, the coroner suppressed the details and it had to be removed from the site?