A farewell will be held at Morrison’s Funeral Home, 220 Universal Drive, Henderson, at 3.00pm this Thursday, 7 April 2016. This will be an opportunity to pay a tribute and share anecdotes with a cup of tea. Jim was always adamant he didn’t want a religious funeral, but I’m sure he’ll cope with a few of us getting together to celebrate his life. After all, he tolerated a dinner to honor his achievements back in 2013.

There will also be an (unofficial) Dedication of the Bagnall Knoll Opposite Waitakere Court on Friday 29th April at 1pm followed by a meal at the local Valentine’s Restaurant.

For those of you who can’t make it to either of these events, or perhaps don’t know much about Jim’s contribution to the New Zealand Fathers’ Rights movement, I’ve gathered together a few photos and videos of him in action. 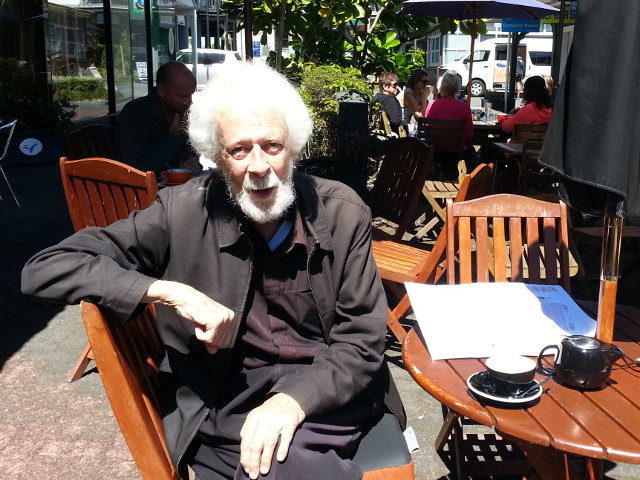 When I rang Jim and asked to see him at the end of 2015, he insisted on coming to Albany and buying me a coffee. “The docs tell me I’m now officially dead”, he greeted me cheerfully when I arrived. He was on his way further north to help a woman regain care of her children.

I first met Jim in the late 1990s. He came to visit me at my home, and informed me that he had recently been sent on a compulsory Anger Management course at Man Alive in Henderson. He felt that he had been treated unjustly by the system, experienced the Duluth-based course as abusive, and argued with the facilitator. The course didn’t achieve its intended result. “I’ve never been so bloody angry in my life”, he told me.

Jim was particularly incensed by the lack of due process; nobody was interested in hearing his side of the story. I believe he felt he had been unfairly alienated from his family, and that his personal need to re-connect with his own children drove him in his mission to support other parents to remain in their children’s lives. I feel sorry for his daughter Mary and her siblings that they weren’t able to reconcile with their dad before he passed on. When I look at the “Project Reunion” sign at the top of his van I know what motivated Jim.

When he learned that thousands of NZ fathers were loosing access to their children, Jim decided that the only sensible response was to try and change the system by means of political protest. Later that year, an informal group calling themselves Dad’s Army was formed, and he became known as “General Justice”.

Yes, Jim was angry. He developed an involved theory about Justifiable Anger. In an earlier period of his life, Jim worked at the Auckland Zoo. One of his most interesting jobs was parenting a young chimpanzee – one of our closest primate relatives. There were several occasions when Jim’s loud, theatrical antics reminded me of an adult male chimp displaying a carefully calculated and calibrated aggression message.

Over the next decade, Jim or one of his many other alter-egos organised hundreds of protests outside Family Courts up and down the country. There were also protests at various conferences, and outside the offices of professionals such as psychologists who supported the feminist-inspired father-removal project. Ghost of Due Process The Family Court Judge From Hell The Judge from Uranus, making a delivery to the Law Society The Grassy Knoll opposite the Waitakere Family Court – October 2004

Jim and the Police

While Jim was never afraid to challenge authority, he was always respectful and never provoked an aggressive response from Police. As far as I know, nobody was ever arrested at any protest organised by Jim, despite the fact that feelings were often running high. Recently I stumbled across a Police Intelligence Noting online, reporting on a Family Court protest. The “older male with a long white beard who declined to give his details to Police” could only be one person: 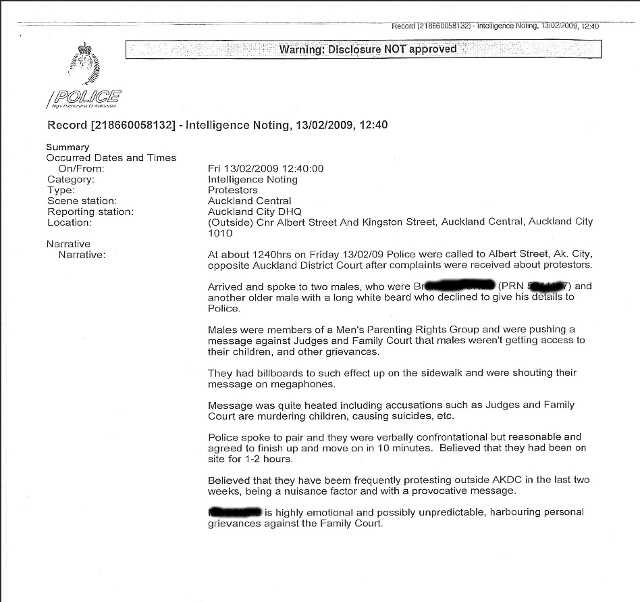 Jim could be serious when the occasion warranted. Here he is at a forum put on by the Father & Child Trust in September 2001 titled Children in families as reflected in statistics, research and policy.

There is a report on the Wellington conference here. It is an old page, and many of the links have unfortunately rotted (ie: expired).

The Wellington meeting had attracted dozens of father activists from all over the country. A group of us, inspired by Darrell Carlin from Tauranga, decided that there was a need for a national organisation to advocate for fairer treatment of fathers by the Family Court, and the Union of Fathers was formed. One early initiative was for fathers to place a small paper blue dot sticker on all court documents to remind officials the “the Union of Fathers is watching you”. It didn’t take long for court registrars to start refusing to accept any documents with a sticker attached!

Jim was very enthusiastic about the Union concept, and purchased a large van which he had professionally painted with Union of Fathers contact details, and fitted with a loud public address system and a microphone that he could use while driving around. He appeared on TV a number of times as the UOF spokesman.

Unfortunately, the Union of Fathers never really developed an effective organisational structure with proper national representation, which is unsurprising considering the fact that the group was never able to attract significant funding. When newer members decided to re-focus the Union on support for fathers, and try and shake off the protestor image, Jim’s highly visible presence became a bit incongruous. I don’t believe this ever worried Jim, he just carried on doing his own thing. Founders of NZ Union of Fathers Jim Bagnall interviewed on TV about the “Save the Males” demonstration

Jim became one of the main support people at the Men’s Centre North Shore Monday meetings. He began accompanying self-represented fathers into Family Courts and acting as their McKenzie friend. Over the next decade he attended almost 180 hearings, gaining an unprecedented knowledge of how the court actually worked. Some courts clearly felt threatened by Jim’s presence, and introduced extra paperwork for McKenzie Friends where they had to promise to keep what they heard secret. At least one judge banned him outright. Other judges realised that Jim’s close engagement with the father offered an opportunity for negotiation and compromise, and even went so far as to ask his opinion in some cases.

In May 2003, Jim hired the Remuera Bowling Club for a one-day workshop to train McKenzie Friends. Lawyer Rod Hooker made a very useful presentation, followed by a talk by MP Rodney Hide. In July the same year, Jim organised a second workshop on Child Support, which was attended by representatives from IRD who had been working with Men’s Centre to help fathers. These weres another more great networking opportunities for activists around the country. Videos of Jim in action

NB: these videos are all tiny because they were made in the days when most of us only had dial-up internet.

The Ghost of Due Process outside Auckland Family Court, April 2001:

Interviewed on TV1 Holmes about “James” – whose baby daughter remained in the mother’s care despite the fact she admited to using the drug P while caring for the child – Jim was threatened by the judge if he revealed any details to Members of Parliament. Note the sophisticated video capture technology:

Protest at Counsel for Child Conference in Auckland October 2004:

Jim has been suffering from cancer for most of the 21st century. I remember him telling us over a decade ago that he didn’t expect to live more than a couple of years. Although there have been many reports since then about his illness getting worse, he continued to do the work he was passionate about; helping men and women deal with the Family Court process. I started to think of him as being like the Energizer Bunny, which just never runs down.

Jim Bagnall was a remarkable man, and all his children deserve to be proud of him.

If we ever need a patron saint of New Zealand men’s activists, I agree with Rodney Hide that Jim is the ideal candidate.