The woman’s view although they have had a liberated voice for a long time is often a little obscure.

It varies from here come those crazy bitches to vary degrees of nods or silence to may God help you … (I do recall that last one being as recent as last year, whoever the kind soul was who took pity on us).

Every now and again there’s a wiff of political sanity that offers a pretense of fairness to the embattled men in the gender war.

But I honestly didn’t think in my lifetime I’d see a pretty face holding up this protest sign – have a look at the one on the right.

It’s from the RNZ news site and good on them for spotting this if it wasn’t a jack up.

I’d love to hear her view on what inspired this sign because I think she’s right on the money. But then again she might not be thinking what I’m thinking.

A couple of us on this site bounced this idea around a few months back, although I don’t think we were talking about exactly the same thing.

But naturally, seeing this sign now, I’m thinking … reality might be starting to sink in for some of these girls.

So, what’s your take on this protest sign? “Stop The Devaluation of Feminised Jobs”. 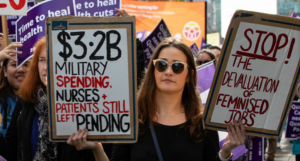 5 Responses to “A Woman’s View”