The Life and Times of Clarke Gayford

Jacinda Adern is our 3rd female Prime Minister, however what is substantially different is the public inclusion of her partner (Clarke Gayford) by comparison to the husbands of her predecessors Jenny Shipley and Helen Clark.

With the presence of social media it has been much easier for Gayford to put his political oar to the airwaves and this may be taken by the media as an invitation to publicly dissect him.

While Gayford had his own visible career prior to the 2017 election campaign and subsequent political pregnancy the couple may now be exposed to Gayford’s maleness according to Feminist media.

Might he have been better to stay quietly in the background?

Has he been forced into the politicaly charged life of their expected child regardless?

I expect there will be some interesting news around this. 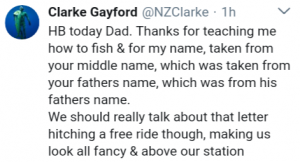 4 Responses to “The Life and Times of Clarke Gayford”