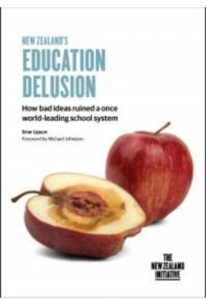 Briar Lipson is a Research Fellow specialising in education.
Before joining, The Initiative (A NZ Project) she was a maths teacher and assistant principal in London. Briar co-founded the Floreat family of primary schools and has worked for International Education consultancy CfBT, and the Westminster think tank Policy Exchange.
Briar arrived in NZ in 2017 and her book is the product of research into the NZ education system.

At face value that may not interest you but before you dismiss this, let me add …

The text evolves from Briar’s own pursuit of excellence in a feminist environment, her realization of the fallacy, and her escape from La-La Land.

When written from a point of view of the personal pursuit of educational-truth this exposes for you a commentary of what is always denied by feminists.
Her exploration of these matters takes us a step beyond anything from Warren Farrell and provides us not only with an objective bird’s eye view of our education system but an explanation into the path … that brought us to this point.

Who should read this book?

If you are already here I shouldn’t need to tell you that.
It’s essential reading for any concerned parent (not just fathers), for teachers (aspiring, present and past) and for those who have an active interest in what is about to unfold …
It will be the biggest scrap we’ve seen in this country since the Spring Bok Tour and the review after, more disputed than Erebus.

At my age I can put some context around the history. I easily relate to this book because it’s written in a language I learned at school before the scorched earth of feminism arrived.
My children were in early education when the Lange-Douglas government began the specious liberalisation of education on behalf of feminism. It had taken hold in the Ministry of Education to the extent that the 1990s became a battle ground of resistance, experimentation and ideological determination that went as far as the courtroom.
Parliament was losing control of education and by the time Heken Clark arrived as PM in 1999 the feminist invasion of education was a train the wouldn’t slow down – Charlie had the handle.

“By many international metrics the performance of New Zealand’s Schools has been declining for two decades, with the most disadvantaged of our young people being the most acutely affected.”

The origin of that quote may surprise you. It came from Victoria University. The admission though is mischievous and another debate.

To think that this failure, lies only in the last two decades would be a first mistake and I hasten to add the importance of the rest of that bigger story because of the numbers of people with a personal investment as well as the position of the current minister, who accepts both education and the delusion as real and pushes forward a claim to some God-like mythical territory between the two.

If you thought I was being over dramatic in what I said earlier about the size of the problem perhaps you just reconsidered that?

Many quotes could be easily extracted from the book and discussed at length. It’s not a big book but the conceptual depth bursts forth because we are so used to being fed the fallacy of feminist dogma that works against what is exposed here. Briar makes no attempt to deny the obvious.

It is not an assault on equality – it is a pursuit of reason.

This is one example of what you will find;

“Because child-centred orthodoxy tells us that traditional teaching crushes individuality, motivation and agency, I was trained not to talk from the front of my classroom for more than a few minutes.
I was trained to see group work as preferable to silent practice, and activity as a sign my children were learning. If children misbehaved in my classroom, it was because the content I was teaching lacked relevance. I must design lessons that engaged the students and spoke to their interests.”

Feminists wanted primary school teachers to be the spare mum, for every mother, and ultimately mothers as the only authority of the child.

If the signposts on the ideological road map of feminism don’t leap off the page and slap you about the face you have missed the boat along the way.

I’ve researched and posted here before about male access to education training and the revolving door of discrimination that has existed in our education system.

If you have read anything about the feminist reliance on the psychology of slavery you will see that clearly between the lines too.

So, it’s a great read from many perspectives not least for any young woman trying to come to terms with her own indoctrination and the sheer size of the task of self-liberation.
An acknowledgement of the myth of women’s liberation and the feminist lie that has enslaved their own gender to the ideological slavery of the mind and hatred of men.

If you are a thinking person you may look back to that daunting day you left school to set foot in the world. Imagine the shock of the deluded youth meeting the real world. The struggle of the ordinary mind brought to face dilemma.

I don’t need to spell out how some people will respond in the face of that realization and any realization of stolen identity.

Having spent many years dealing with traumatized men emerging from the family court, I’ve seen the face of shock and understand its inherent dangers.
If you need anecdotal experience to state the obvious, I have it.

Whatever you do, don’t let any politician, not one politician, sell this off with political emotion the way they have in the past.

Especially not to the ongoing cost of men and their children. My sincere condolences to the family who own the suicide note two posts back.

But back to the “Education Delusion” and Briar Lipson whom I suspect has yet to realise the place in our history she has just claimed.

8 Responses to “The Education Delusion”

Click here to cancel reply.
« Kidz Need Dadz growing     This is the place where a man who experienced the family court burned himself to death in front of Jacinta Adern. So far nothing has improved. How many more deaths are required before Jacinta takes a different approach? »