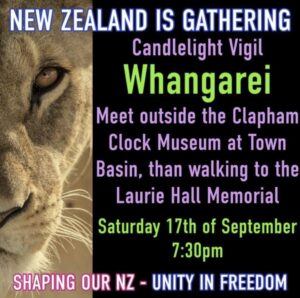 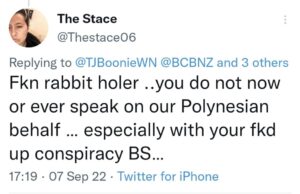 This particular outrage was attached to a tweet from Chris Luxon (Not a political broadcast) I can understand his concerns about education though, when you see this out of the mouths of the next generation of Pacifica.

They’ve been easier to lead astray, easier to sell the colonial lie to, easier to inspire with hatred, and more seriously, easier to drive into the security of manipulated regression.

Underground there is an army of resistance, and so many of those involved are women. And not the … those with a limited vocabulary that doesn’t extend past, racist, bigot, misogynist, old-white-man and Aotearoa.

Going back 20 years as male resistance to the feminazi attack started to dwindle, talk turned to the rise of the “White Lady” (in NZ that often referred to former ACT MP Muriel Newnan, now in her 70s – but as politically active as ever).

There is no white lady but an army of them. They are quietly raging too. Rising against, Ardern, incompetence, insincerity, her pretence of perfection that delivers nothing more than a propaganda programme and the rhetoric that Labour supporters learn from their inboxes.

They’re parots and they need a new perch to shit from. And the good thing is, these women are happy to say so, and more than capable too.

They’re a challenge to a Feminist machine that’s relied on power and control, volume, ideology, and character assassination.

When Ardern’s supporters see there is more to life than their inbox, her support will falter.

It takes effort, but it’s happening.

8 Responses to “A Rising Rage”

Click here to cancel reply.
« In the case of Brett Power     Barry Soper »