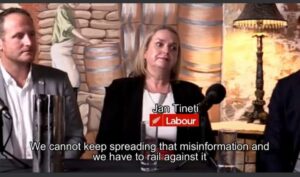 STUFF News remains heavily invested in its traditional feminised format and as a consequence we see gendered disinformation from New Zealand’s largest news platform where we don’t discuss female failure.

We’ve grown used to our Prime Minister, Jacinda Ardern leading the way in this respect with the rejection of accountability by rejection of the premise of the question whenever asked about anything that doesn’t taste as sweet as wild honey.

This irregular pattern of behavior has gained significant public disapproval along with calls to fumigate The Beehive and repopulate it with a more functional and responsive species.

These circumstances were previously noted by STUFF’s senior journalist Andrea Vance saying that parliament had become an “artfully crafted mirage” and while that’s all very poetic the description doesn’t demand accountability.

The lack of attention around accountability has been encouraged by a lazy Opposition that appears to support the principles of different standards for women in parliamentary business.

Of course the flow-on effect is now well established and increasingly visible where other females expect to be able to do what they want without accountability too.

The most recent example at the highest level is our Foreign Minister and Local Body Minister, Ms Mahuta who was said recently, “To have too much on her plate.” as she faces allegations of conflict-of-interest corruption through favours to the whanau.

This combination of Her Magesty’s dysfunctional Opposition and media disinformation leave other incompetent females to carry blithely on boldly going where other women now want to go too.

It’s an infectious disease for which we haven’t yet developed a remedy.

There has been no interest in holding Jan Tineti to account for her other portfolios outside of Minister for Women, while Tineti has become another example of someone paid too much and of whom too little is expected in return.

Oddly enough an increasing number of men, some influential others simply with recognisable male deficiencies have become defensive of the female right to fail without criticism.

We certainly need more functional news outlets to raise matters of important public interest that the offending females would prefer went unnoticed for the sake of their personal comfort.

STUFF News in particular, having remained stubbornly selective about the increasing number of disclosures about female incompetence will not enjoy the heat.

And with questions of conspiracy to injure hanging over the current Press Gallery Chair, Maiki Sherman, the realisation that media females may also be in for a rude awakening may encourage more ethical journalism.

29 Responses to “The Disinformation News”