As expected the reply from the Associate Minister of Health Peter Dunne was a fob off, in response to my clear expose of anti-male gender bias by the Ministry of Health in the way it reports and responds to suicide. I publish Mr Dunne’s letter here for all to see the extent to which it denies, whitewashes, fails to address and lies about the Ministry’s gender bias.

When you write clearly about concerns to government, this kind of fob-off is the norm. However, that doesn’t mean your letter has been ineffective. Ministers and executives may not wish openly to admit the wrongdoings of their organisations, but behind the scenes things can happen that are reflected in future changed behaviour. For example, I have previously complained to ministers and others about gender-specific language when discussing violence (as if only women are ever victims and only men are ever offenders). Although I received letters like this one from Mr Dunne, full of patronizing stuff that doesn’t address the issues, I found that those same people later stopped using the gender-specific language. 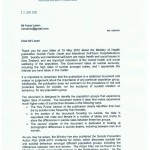 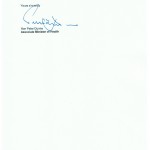 8 Responses to “Response from Minister”

Click here to cancel reply.
« Family Court not for revenge     Protecting yourself from Perjury »