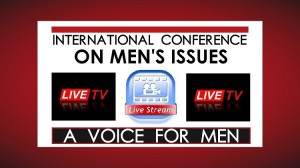 The first international men’s conference, to be held in Detroit this weekend shrugs off the recent threats of violence that forced a change in venue.

The evolving story of the feminist backlash against men who dared to confer without consent was discused in an earlier post Feminist Extremists attack Men’s Conference.

Conference organisers A Voice for Men (AVFM), remain tight lipped about any casualties from the original speakers list as a result of concerns for personal safety, however the current advertised list of speakers looks set to herald a new error in awareness of men’s issues onto the international political stage, addressing a variety of issues such as circumcism and paternity fraud, and the need for political activism, along with the more familiar topics surrounding Family Courts.

AVFM’s Media Director, Janet Bloomfield, has been working overtime to have live feeds available from the confernce via You Tube to reach a growing international audience that is becoming more aware of the urgent need to address the range of men’s issues causing increasing conern to the well being of the Western World.

Bloomfield will also be operating a twitter feed, tweeting relevant updates, through @icmi14 …

We invite listeners/viewers to tweet questions for the speakers during their talks, and we will endeavour to have one or two asked on the floor.

The costs of this conference must be substantial. For anyone wishing to offer financial assistance to AVFM, there are a range of donation options here.

Click here to cancel reply.
« Labour’s List Made on the Basis of People’s Genitals     BBC Live on Female Domestic Violence »