It came out loud and clear as far back as July that election 2014 was going to be the election of the feminist, or so THEY thought. Most of the relevant posts can be accessed through a previous post New Zealand Labour and the Feminist Election Campaign.

The post election analysis is going to be interesting, not only for what we might say here, but what the New Zealand media might actually say about it.

The campaign got even more overt when Internet-Mana announced that it WAS a ‘feminist party – one step up on Labour running a feminist campaign whilst trying to pretend that they weren’t really a feminist party. 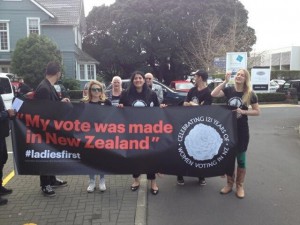 After the Feminist Vote

The media was already playing ‘Where’s Hone’ when the announcement was made – it was obvious his male voice was suffering from the constraints of Laila Harre, the newly appointed Internet Party leader – joint photos of her and Mana Party leader (Hone Hawawira) had them looking like an irreconcilable couple, exiting the Family Court mid-hearing.

We looked at that, in the post A Feminist Party?

Anyway, it’s Suffrage Day today (yes, you’ve remembered, haven’t you, the same day last year, that Judith Collins led a parliamentary sandpit-celebration, while quietly sneaking through that ‘other child support legislation’) and today feminists now have their very own party, banners included, forget equality – we’re the party for you.

Not sure that this is what the big German (as he is quaintly known Down Under) Kim Dotcom envisaged when he dropped a couple of million into the party coffers.

But we’re all blokes here – let’s hope Kim is just on a bit of a learning curve – and he’s not a yet-to-come-out closet-feminist.

Personally, I think Internet-Mana are in for a hiding-to-nothing tomorrow; they may have encouraged a lot of young people to register but the German Shepherd’s Prayer; The German is my Shepherd, I shall not want for better internet, may have got lost along the way, squashed under sideshows, distractions, and something else that is now clear the country doesn’t want – feminist parties.

While Laila’s lackeys are out there swinging their banners high today – they might do well to remember – the vote was won long ago, and it ain’t ladies first no more, we’re equal now, or did Mater Harre forget to tell you that bit.