Children thrown from bonnet – mother charged
Actually, this one’s been referred to previously here on MENZ Issues but we liked the photo. 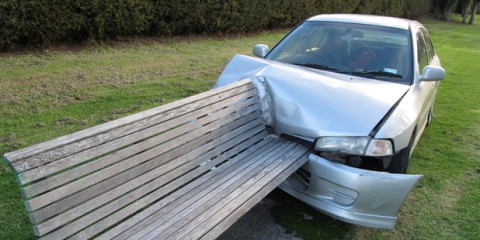 So this mother drives quite fast around a park with two young children on the bonnet and crashes the car as shown. It could easily have been fatal for one or both children, but luckily they escaped significant injury. So what’s sexist about this article?

Well, as pointed out previously, the police officer’s comment “Personally I’m appalled at that kind of behaviour” suggested that others might not be. If any man had behaved this way police would likely refer to his stupidity and irresponsibility, but such punches are pulled when it comes to a female. Further, “The matter has been referred to Child Youth and Family Services for their consideration”. Well, if CYFS are happy to return a child to a mother who a few months before cut its throat in an effort to kill, they probably won’t be too worried about this stupid joy rider risking her children’s lives. Quite frankly, if the driver had been the father the article would have read “A protection order has been issued to prevent contact between the father and children while the matter is investigated”.

Preschool upset male teacher has to leave NZ
This government and previous ones have gone to great lengths to encourage women into jobs that men tend to do, such as police, armed forces, engineering, trades. But we simply don’t see much in the way of encouragement or initiatives to try to balance genders in employed roles heavily dominated by women. This government now shows its true sexist colours by refusing to recognize that there is a male skill shortage in ‘early childhood education’. So it deports one of the few males, and a highly valued one, qualified for that role. Oh, it’s that Immigration Department with a female minister again showing its commitment to gender equality.