There is a lot that could be said about the recent deaths of a mother and three children in Ashburton. You could hardly be blamed for thinking ‘oh no, not another Ed Livingstone‘ when this story initially went to air.

There is something a little more sinister afoot (a foot in mouth that is) around this story now: Source:

The socialite daughter of leading fashion designers Denise L’Estrange-Corbet and Francis Hooper has caused outrage with a comment on social media mocking the death of a mother and her three children.

Police believe they died from the fumes of a car left running in a garage to keep the battery “ticking over”. It’s suspected they could have been dead for up to a week before being discovered. 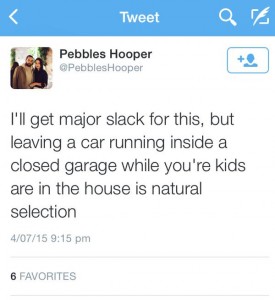 Notice the difference in the way this is reported!

We’ve seen situations like this before when Alasdair Thompson of the NZ Employers Association said “Women were less productive because of their monthly cycle”. The media didn’t stop on this until Thompson resigned.

But here. This is news. Socialite cutie columnist *get ready to gasp everyone* calls the deaths ‘natural selection’.

This kid (and she is an immature kid, who’s done this before) is a columnist for the NZ Herald – they’re not commenting.

This is like a pissed politician saying “Do you know who I am”. They didn’t stop until Aaron Gilmore resigned either.

Let’s see how the media treat one of their own!

Footnote: Apparently she doesn’t drink alcohol or do drugs, so it’s totally sober self-righteous stupidity.
Conclusion: Feminism is like natural selection – there are times when it has allowed simple organisms to crawl out of the mud.

Reading through the feedback from Hooper’s detractors many are young women of her own age. It is quite apparent that having been a little too liberal with her opinion she is no longer viewed as a good advert for her privileged upbringing, or admired for her thinking.

There has been very little feedback from established journalists – it took the public to hold her to account – so much for the media when it comes to one of their own.

If anyone spots a media person having a shot at this please post a link in the comments.

NZ Herald sanitises the apology – doesn’t mention ‘natural selection’ once. How would a reader know what she apologised for? Basic journalism out the window when it’s a female reporter at fault.

To refer to these deaths as an example of “natural selection” illustrates such a profound lack of compassion and human decency that it beggars belief.

Herald on Sunday editor Miriyana Alexander has also apologised for Hooper’s tweet, saying the view wasn’t shared by the paper and that the matter would be treated seriously, including following it up with Hooper this week.

(Does that mean; if you’re not bringing your resignation bring a legal representative?)

The insertion of the outrageous and shocking to leaven the usual fare of banal trivia is standard stuff for today’s gossip columnists – filling the void where intelligence, insight and wit ought to be – but the comment and the attitudes it betrayed went beyond even our modern pale.

8 Responses to “The Silverspoon Sisterhood”

Click here to cancel reply.
« More research showing the importance of fathers     Inside the mind of a victim »