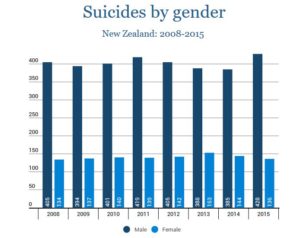 Saturdays Stuff article focused on suicide. In particular a 10 year old boy whom I won’t mention here. The article written by Laura Walters did not have a comment area.

So why do men kill themselves at a rate of 3 to 1.

The government says all suicide is a mental health matter. It comes under the ministry of health.

I see it as men have less protection than woman under the law and are treated more harshly.

• Men don’t have a say if their female partner wants to abort their unborn baby.
• If a man is bashed by his female partner. The man is usually arrested and not allowed to return to his own home.
• Men are much more likely to be barred from seeing their children if they are separated from their female partner.
• Men have their names released in the media if on trial for rape. Even sometimes before charges are laid.
• It is usually a man who loses much of his hard earned accumulated wealth in a divorce.
• It is usually a man who has to pay the woman child maintenance and the woman who does not have to work. On this point I could add that the ex female partner may be seeing a new man while the first man has to pay for it.
• If a man commits a crime his sentence can be twice or three times that of a womans.
• If a woman destroys a mans life by lying about being raped and she is found guilty. She is just usually charged with wasting police time or receives a very low penalty.
• If a man is found not guilty of rape he is likely to still, lose his job, his partner, family, friends, house (trying to pay for a defense), his savings, his future. He will have a mark against him and will not be able to apply for some types of jobs. There is no compensation for men being found not guilty of rape but there is compensation for a woman regardless if the man was found guilty or not. You just have to start from zero again.

These are just a few examples. I’m sure you can think of a few more.

And in recent days we witness a new law being drafted that will allow a woman to murder a man in his sleep if they think he may harm them.

So the question is….. Is suicide a male mental health problem?

I think suicide is not a male mental health problem. It is an abuse or unfairness problem. “It is a lets not consider the man.” Its a lets make it hard, unlikely or just plain impossible for a man to recover his life. It is a lets make the man pay for everything. Lets cut him down and destroy him. Even when he is not guilty. Or his ex wife just does not want him in his children’s life anymore because it may complicate her life or she just wants to get at him. Lets let the man watch his children being raised by another man. Yes that will get him really good.

It is the grief, anguish, heartache and distress caused by unequal laws and the unrealistic burdens placed on men who are often the victims but are never seen as such.

Men don’t need a 0800 phone number to call if they feel like killing themselves. They just need fairness and the be treated reasonably and justly.

But that is not going to happen anytime soon. What is going to happen is there are thousands of men going though crap right now and 400 of them are going to kill themselves over the next 12 months because they don’t want to live an unhappy life with no chance of getting ahead.

Click here to cancel reply.
« You don’t need academia to be a Professor if the subject is Feminism!     Suicide Rate May Be Three Times Greater Than Recorded »