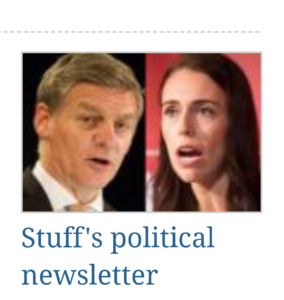 We are all too aware of the Feminist bent, in this woman’s magazine. It’s been the new, woman’s day, for a few years now, and a distant cry from the Dominion Post, its news-stand ancestor.

When it comes to admissions of age, yes I can remember the news criers on the street corners, “read all about it” stuff you need to know.

The first issue for me is an editorial issue, and the independence of the political thought that can be delivered through a news letter by one of our main news outlets. I’m no fan of the current political editor Tracey Watkins, who I expect will author these news letters.

The second issue is the subversive nature of digital photography, which I have written about in a previous post, Flatline Editing. How easy it is to adjust an image to suit the tone of the editor’s message. Manipulated photography is a dangerous political game, as some may have observed in other instances, and written words can co-operate with digital manipulation.

The third and most important issue from my perspective is the men’s voice in New Zealand media. This seldom exists these days, although I would admit, the Radio New Zealand website currently makes a more dignified effort in recovering from the tranquil depths of its former bias.

The business of news, is now into delivery of political persuasion. Morally, ethically, it is not their job, but in the pursuit of profit, men suffer once more.