Suicide And The Hidden Reality

The NZ Herald has run a story on youth suicide. Any story helping to drop the suicide rate is to be commended but why pick youth suicide as though that’s where the BIG PROBLEM lie. Check out this bar chart and you might see my point.
For the website go here 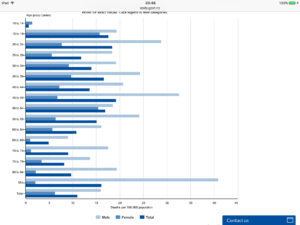 It should stick out like dogs proverbials where the biggest problem exists and where most help and public awareness should be focused. It is my cynicism around the NZH agenda that I note – in youth suicide the gap between male and female is a lot closer than in any other group. It is the one cohort where you could (possibly) state that suicide is not a gender issue. Over-all, and in any other group, gender is a major issue and is ignored as such by the media and mental health. To be fair, the lives of males have been dispensable and used as cannon fodder since time began so why should any body think to put a stop to that now?

25 Responses to “Suicide And The Hidden Reality”