A Hero – The Glorious Click-bait 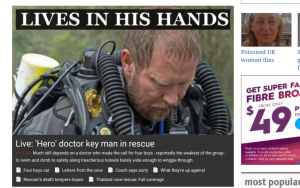 In a land far far away a man steps out of his daily life into international limelight and heroism, as he attempts to rescue 12 boys and their unfortunate coach.

The story is enlarged, and highlighted as with other big stories on the Stuff News Platform: Commercial trolling of the population at its best.

(To be clear about what I am saying here; remember that trolling is not annoying someone on social media, it is more specifically an attempt to create an emotional reaction.)

With a glance to the right what catches our attention is another international sad story about a woman who died in the UK. They’re so predictable, aren’t they?

Do I recall a recent caving rescue in Nelson, I’m sure there was something in the news about that, wasn’t there?

Is there something about NZ men that no longer makes what they do in NZ important because we are unimportant?

Or was it just expected of our men, or were they not considered ‘significant men’ who were engaged in taking the risk?

Or is it simply not politically correct for a dogmatic Feminist editor to promote positive images of men in the media.

But wait. Did this guy just materialize out of no where?

A doctor – an educational success … a diver – the training … a potholer – the adventurer.

The point of this post of course is to highlight how we allow the negative archetype in the media diologue in this country to overshadow the positive role model, the example, the posibilities that might be created in the imagination of readers.

Could you imagine a tyrant standing by the village fireside relating a destructive tale to the village or rather a good storyteller with a lesson on what not to do?

But here we sit watching Stuff News on a daily basis be the tyrant rather than the good storyteller, creating the negative diologue, totally obsorbed in the frivoluties of any female sucess which they appear to be addicted to.

Repeated on social media, the diologue of our country is a self-fulfilling failure.