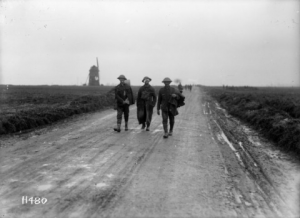 Walking Wounded is a picture taken by Henry Sanders (New Zealand official war photographer) 100 years ago, at Courcelles 6th April 1918 – who knows if they ever made it out alive, or what their lives may have been like afterwards.

It was the title that caught my attention; like it or not, that’s what we called the troops in UOF, the walking wounded, casualties of The Family Court. Fighting back from the hospital tent, but without the ‘stench of war’ as was said of WW1.

While the casualties of peace suffered the smell of their isolated battle alone, at least UOF did not have any fatalities. Better still a later analysis even showed our efforts disturbing the upward trend of male suicide.

As we head to Anzac Day 2018 and the remembrance of this sacrifice in the name of freedom, that will take place not only in NZ but at our memorials in Europe as well, we have to question the attitude we take in this age to the welfare of men in our ‘civilised development’.

Certainly we have to question the disrespect shown by the Green Party both to our RSA members during the campaign and their current disrepect to our older generation of men since the recent election.

Let’s keep an eye out for the attitude in the next few weeks in the lead up to Anzac Day, and please do feel inclined to name and shame in the comments.