What’s your name, who’s your Daddy , does he look like me?

I was 21 and had been living in the UK for a couple of years when I got a letter from my father in Australia.
He was writing to tell me that he was very happy and that he would soon marry a local woman who he had known for a just few months. They intended to travel together exploring Continental Australia, It had been 10 years since my parents separated and I was pleased for him. I knew the woman or knew of her as she had a daughter my age that I’d partied with a few times.

There was just one little issue, the woman was pregnant to another man, apparently some horrible monster of a demon Man – as we all in turn, frequently become when we are no longer desired. 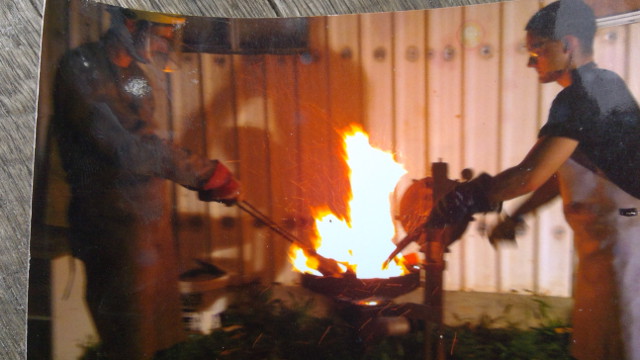 This was considered an honourable thing to do by many of my relations that all knew my father had had a vasectomy procedure 20 years earlier.

The women particularly, believed the fraud was all good.

I realise now it was also a very risky as had the marriage failed he would have been ordered to pay almost 20 years of child support for a child that was not his.

But it didn’t fail, For the following 19 years they were happy together and raised the boy.

Then in 2011 I got a call from his wife, She told me his cancer has gotten the better of him, Hope of recovery was receding. I had just arrived at his home as an ambulance brought him home from hospital.
The paperwork that arrived with him said- ‘do not resuscitate’, my father had been allowed to return home to die.
For the next couple of days with the help of oxygen he was able to speak quite well and we chatted away like nothing was the matter. But a few mornings later- after a few days of discomfort from bowel cancer my fathers body, aged 68- was all that remained.
He had left his wife well provided for with their home paid for and another property with a small mortgage.
My Dad and his wife had been reasonably fastidious parents, always remaining in the right school zone for the boys best education opportunities.
It always surprised me that they had never just been honest with the boy and told him that his real father was another man. It was always said that they would tell him- one day, when the time was right.

The boy had been a brat child at times as some children with older parents can become. My father and the boy hadn’t always gotten on so well.
But I always enjoyed him and did my best to bond with him as best I could considering the 21 year age gap between us.
18 months after My fathers death I got an email from my his widow that she had concerns for the boy, he had dropped out of university and had taken an interest in knives, there had been some youth stabbings in the town and she was worried he was rolling with a bad bunch and might get into trouble.

I had recently become separated from my own marriage- which I had no intention to try to rescue.

I travelled again to Australia and got a contract there and an apartment and settled in for a while.

The boys interest in knives was real, he loved them and so do I.

He was most interested the properties of steel and knife construction.
I had joined the local men’s shed and after some enquiries – a fine forge and anvil was found.
The boy and his mate researched and found a couple of old buggers that had been the forgers and smith’s back in the day when everything was still in black and white and they visited them for advice.

They managed to procure all the safety gear and tools necessary for experiments to begin.
They cooked up lead then zinc then brass and bronze then got to work hammering and tempering steel, toiling away in the tropical heat hammer and tongs, in the evenings we would pull out a couple of shovels for bbq plates, go foraging in the gardens for herbs and salad and we’d pull apart some cheapo sausages fo a potluck Aussie mess, we could hardly taste the dirt.
Perhaps not to Paul Hogan’s standard, but a fine knife was the boys creation to be proud of.
He got stuck in at the shed which was very well equipped, I trained him up on the band saw and other machinery and he got to work finishing some fine woodwork projects as well.
For the first time him and I had truly bonded as brothers might and I was choked up more than a couple of times with pride for the young guy and sadness that my/our Dad couldn’t be there to join in with us.

The boy had shown excellent initiative and creativity as well as capabilities in research , organisation, saftey and finishing projects, one after the other, never forgetting that the job is not finished until the tools are put away.
Men’s shed have Govt funding in Aussie and what an amazing resource this shed and its men and its tools and machinery were to us.

The closer I became with the boy the more I questioned his parents decision to never be honest with him. Their decision meant we all must live in the lie.
The man he was told was his dad was dead, and his real father lived somewhere in the same town apparently.
Still his Mum was insisting that it wasn’t the right time to reveal the secret that everyone except the young man knew.
Six years have passed since then and last year when I was visiting, the boy was home from university, still being educated beyond his engineering degree, he has good health good mates a nice car and a hottie girlfriend, (Rated in that order by me!)

Again I pressed the issue to his Mum telling her the boy, now 24, – deserves the truth.

She agreed but claimed the boy was doing so well she didn’t want to upset him, She had written In her will- a note for her older daughter to decide if and when to tell him should she pass on.
She claims the unsavoury character of the boys biological father would not be well appreciated by the boy.
She also admits that she expects the boy would be displeased with her for a lifetime of dishonesty.

This year we will have a family get together to remember my Dad and his brother who passed on a couple of years after him.

Since Discovering Menz site a few years ago and reading through the writings on the topic by thoughtful men (particularly the great DJ Ward ) I have been enlightened and shocked at how common paternity issues are for us.
If I read correctly, someone estimated that this could be a one in three chance. That one in three of us either believe someone is their father that isn’t or that they believe they have a daughter or son that isn’t biologically their offspring?

I want to spill the beans, I want to give my brother the truth, I realise this will likely make me despised perhaps for many years by other family members particularly the women who claim to always know what’s best for everyone.

I’m unsure if the man even knows he has a child at all.

Any failing the boy succumbs to in future will be likely be laid at my feet forever.

The family gathering in remembrance of my father would probably not be the right time, but when and how I’m not sure.

So I’m hoping some advice from Men I’ve never met but who’s thoughts I value like DJ and Man X and all you others might help me decide what to do.

I politely ask the women that read these pages, to refrain from commenting as I really just want to hear from men about this one, Thanks,

Signing anonymously,
But I could be your neighbour,
Or perhaps the guy who lives three houses away … ?

Click here to cancel reply.
« Bettina Arndt – Speaks about how men have been left vulnerable in today’s society. And why men are committing suicide at a rate of almost 5 to 1.     Judge Timothy Druce »