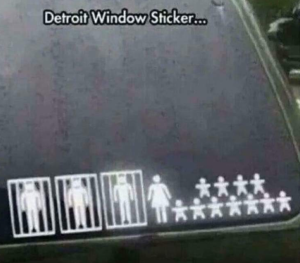 This is doing the rounds on social media and I see the question asked; could it just as easily relate to New Zealand?

Could you see the same sticker on Conservative Party vehicles at the next election?

That aside the eleven children is more likely a reference to the end days of Rome when the elite stopped reproducing. This wasn’t a remarkable feat of abstinence, they could afford and used a supply of goats bladders to avoid pregnancy.

The issue of the next generation didn’t escape politicians and while they passed various laws to tackle the issue they also had border guards trade children for dog meat to bring young slaves into the empire. With a significantly higher mortality rate a good woman needed to produce eleven(11) children to do her bit for the Empire. By comparison the New Zealand joke back in the 70s and 80s was two and one third children per family.

Roman adoption processes were extremely fast by today’s standards. Unwanted babies were placed on the rubbish tip and anybody wanting a baby could collect one from there if you felt like raising a child.

New Zealand while it has a fetility rate below 1.9 operates as an elite country that survives on immigration.

Some of the initial comments I’ve seen have been negative responses to immigrants and beneficiaries that perhaps do not consider all the issues relevant to us as opposed to Detroit in the US.

Your thoughts on this one?