After reading the previous post I copied this here from a political page. It’s relevant to the previous post and I think some of the underlying causes that aren’t dealt with, that cause the mental health issue to grow rather than get better. 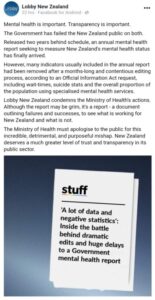 The Mental Health report is topical. Henry Cooke (chief political reporter, from STUFF News) is basking in the unbathed glory of his own imagination after working (and probably quite hard) on putting the current story together.

You would have to expect to work hard as the political resistance would be huge. Cooke doesn’t get this. He doesn’t get that the resistance is there, not because of what’s currently happening, but because of what’s already happened and that this is ongoing … so having got a redacted report out of the Miistry of Health, he’s on cloud 9, thinking his job is done as this only relates to hiding current incompetence.

How wrong could that be?

The mental health of those working in the department is probably at risk because of the size of this. It wouldn’t surprise me if one if them killed themselves because they take their job and their relationship with other human beings seriously.

We saw similar after the WINZ shooting in Canturbury where the Branch Manger of the dead and injured staff committed suicide.

Make no mistake … understanding this is a long and complicated story … one I entered into in similar circumstances 25 years ago, thinking this was something that was a current issue that could be resolved by publication and would be rectified because people would be concerned.

The public think the same way … if it’s public it’s fixed by the same white light we see with.

Many years later I would discover that this had happened before … before Cooke, before me … and the even before that again.

Watching Cooke on social media we can see how deteriorated the current standard of journalism is, we can see his naive arrogance getting the better of him.
I’m not trying to defend media here but pointing to the ability of government to subtly manipulate the story without the journalist even being aware of the manipulation.

You have to understand the no surprises relationship functioning between heads of departments and Ministers before you can start to understand how this can possibly happen.

Understand the folly of the situation and how both Cooke’s ego and his inexperience is killing the truth – call that mounting to incompetence if it makes you feel better – but I can tell you it won’t solve the issue because the journalist doesn’t have the experience or an editor that’s anymore than a $1 owner to stare him in the right direction.