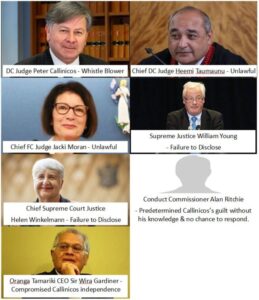 District and Family Court Judge Pete Callincos sent a woman to jail for perjury. This is what happened next.

I know in my heart these Judges will be exceedingly in agreement with this publication as it is in line with those same Judges who are always telling the accused their right to privacy and wellbeing is nowhere as important as the public’s right to know.

Abstract from Karl du Fresne 1 Blog “The two senior judges, known as the Heads of Bench, acted after Sir Wira Gardiner – then head of Oranga Tamariki, the department whose social workers Callinicos grilled over their behaviour in the Moana case – had contacted them.”

How is it that Sir Wira Gardiner, a senior Government employee, can contact Chief Family Court Judge Jaki Moran over a decision from another Judge he didn’t agree with?

A little while back I wrote about how it was impossible to complain about the conduct of Judges as no complaints ever made it past Alan Ritchie. I was wrong. But only because I never considered a complaint made by DC Judge Peter Callinicos represented by Mr Tony Ellis about the alleged behaviour and actions of the most senior Judges and supported by a further 60 NZ Judges. A clear sign they are just as fed up as the public is with the nasty, underhanded measures from the brass when justice is served on a woman lying in court.

300 Complaints about NZ Judges in 3 years