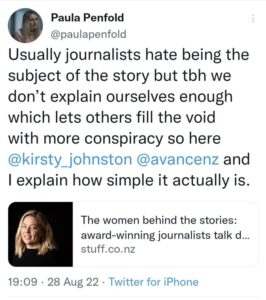 If you’ve been paying attention, and not that you should need to, but if you have been watching New Zealand news lately with a WTF is going on, running through your mind, it’s because you’re watching the most disturbing media spectacle we’ve seen in this country.

Our Stuffed News is a long story that you may not be familiar with. Regardless it’s what’s taking place now with the breaking news of Sam Uffindell (Kirsty Johnson) the release of “Fire and Fury” (Paula Penfold) and the extraordinary attack on a local body candidate this weekend (Andrea Vance) and now the machine interviewing itself about its integrity and success, essentially the self determination and justifications of its celebrated cause.

Which is clearly independent because Andrea Vance says, “People who honestly believe we’re being paid by the government need help.”

The whole damn lark is funded by the tax-payer and this lot are bolstering up what’s left of their business after Big Boss Bouchier entered a media cooperation with Spinoff a benefactor of WHO.

Now, though we’re on the sinister path of destroying public opinion which is critical to society overall and not just to the silencing of the men’s voice that is so often talked about here.

The guise they are odopting is this:

If you have published, as an individual, a group, or in particular some “critical thinker they have identified as a conspiracy theorist” then, they as the legitimate media have a right of reply, even without consulting you.

Not only a right of reply but to hunt and kill because their opinions are superior, backed by a Podium of Truth.

The Podium of Truth not as we saw it in the abuse of emergency but in a broader sense where some “ideology of journalism” represents what they have decided is right.

Some form of journalistic enterprise? Yes it is, even if the best way you can describe it, in a bloke’s short sentence is “Their Bullshit”. 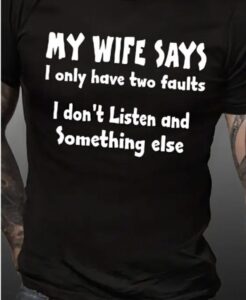 9 Responses to “The Witches Coven”