Courage Under Fire … is a story that starts out in another place:

Imagine yourself with a partner and two children living the quiet life in a tropical paradise when the local village-council announces that, you must be jabbed with a needle of their choosing, in order to remain part of the community. If you refuse, you are to be put in customary isolation in your own home, with restricted communication and only the food supplied to you … read more about that here

Now that you know Mahelino a little better you may think he is a foreigner in a far away place. He’s a Kiwi, of Tokelau descent, who moved from New Zealand in 2017 to build a retirement home in Tokelau. He’s a born and bred New Zealand citizen who has managed to find himself a different form of persecution in a vacuum called a New Zealand dependency where he is a resident in isolation away from our domestic laws.

This week things got a whole lot worse.

Tokelau is made up of three atolls which each have their own Taupalenga or Elders Council that makes the village rules.

The other residents who had been under house arrest were all on Atafu Atoll who this week redefined their tunoa.

Those who remain unjabbed are not subject to house arrest any longer but they still cannot return to their former employment. 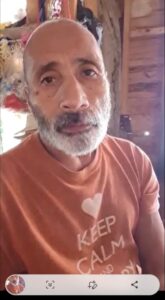 Nukunonu Atoll on the other hand doubled down, extended their tunoa indefinitely and cut off the family’s internet, supposedly for spreading misinformation about their little peice of the world.

This happened on Monday. On Monday night after the family turned their lights out for the night, locals waiting in the dark threw rocks at their house.

Even if the family wanted to leave they can’t because of closed borders. Tokelau still lives in isolated fear of covid.

When it comes to human rights in civilised New Zealand our legislation doesn’t apply as they manage their own human rights, in our funded Dependency.

Mahelino and his family are not asking for anything exceptional – just their bodily autonomy.

The Elders in this Pineapple Paradise have gone to extreme lengths to break his will to resist with a ruling of indefinite detention and isolation.

The Patelesio family are surviving on their last precious amount of data. When that runs out they not only lose their internet but their contact with the outside world as their phones die too.

Our mainstream media in New Zealand is now incapable of reporting independently and Mahelino’s story would otherwise remain untold.

That’s a warning to every one of us, not to let our country become a Hermit Kingdom behind closed borders, led by some insane South Pacific witch.

Click here to cancel reply.
« The Witches Coven     The Importance Of Fathers »