I have come to the opinion that the root problem for men, and in particular white males, emanates from a political dogma that was spawned by Karl Marx and Friedrich Engels as laid out in their published material, Das Kapital.

In short, it paints a picture of the oppressor and the oppressed within an economic frame and sets up the solution as a war of one group against another. By the 60’s most sane thinkers could see, from viewing both the Soviet Union and China, that it failed to produce the utopia promised but instead producing a bureaucratic monster that crushed both groups.

Around the same time in the mid 60’s came the contraceptive pill, thereby giving females sexual freedom and an autonomy not experienced by women ever before. This major event created a perfect wave that was picked up by bitter Marxist female intellectuals and assisted them to pitch females against males within a social frame. The patriarchal hierarchy, dominant male verses the feeble female at the bottom of the heap. Men were oppressors and females were the oppressed. Whilst there were a lack of equal opportunity’s on both sides only one side got to speak. The narrative began as equal opportunity and ended up being a demand for equal outcomes. Competency became a dirty word.

Neo Marxism was born and is nesting within the capitalist system. Feminism was to be only the first identity to achieve a political voice with many others following.

Every evil outcome of Marxism 1 shows up in Marxism 2;
Shut down free speech by calling it hate speech. Put up walls. Shame and destroy people who dare to question their dogma. Misrepresent others opinions. Not recognising the individual, as you must belong to a group, thereby making individuals irrelevent and dispensable.

The end goal of this pernicious ideology has to be tyranny. Fight this demon and our society will be the better for it. As a great philosopher once said…”it won’t happen over night but it will happen” 🙂

I have made up a t-shirt slogan illustrating my point. 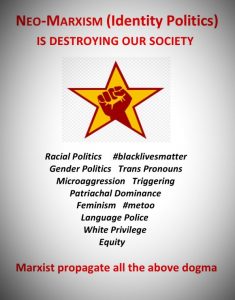 Click here to cancel reply.
« Mother outraged after her husband was kicked out of the parents’ room by a mum while trying to change his daughter’s nappy     More Family Violence Bullshit »