Haven’t we all been concerned about Stuff, the news site, Stuff, that is?

Or frustrated, annoyed, at the very least?

We’ve even had few scraps here about how to confront the beast.

About 15 years ago I was sitting in a café in Ponsonby discussing journalism with a grandson of one of the Dominion Post’s most notable editors. He had grand ambitions of following in the footsteps of his forebear. The conversation would probably be amusing now given the rapid change since then. I have no idea what he thinks now, or could I have guessed, that I’d be making these observations now.

In 2017 I wrote the post Dangerous Stuff which in retrospect was probably as much commercial desperation as it was political manipulation. We have heard since of Stuff’s failed approach to government for funding and it’s possible sale.

I noticed today a new desperation at the bottom of a story I clicked into. 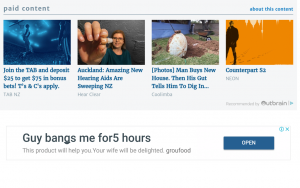 I just didn’t go there – I refuse to be click bait for such desperate advertising.

But this “Guy bangs me for 5 hours” Am I getting prudish in my old age, or am I rightly thinking … what the f..k is going on here? This website holds itself up as New Zealand’s flagship news site. 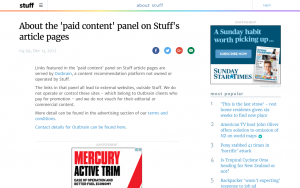 If you follow up on their links about this content you see the advertising is outsourced to an independent company and Stuff takes no responsibility for the content of that space. Really this is the kind of dodgy rubbish you’d expect to encounter on the website of some lone political voice desperate for funding.

The news is not what it used to be.

In an age where consumers source so much of their information online, and online publishing is cheap, new sources of funding have been quick to surface but will also be seriously challenging the continued blend of remaining print versions.
Amateur blogs (If that’s what we still call ourselves) and the rambling diologues of echo chambers probably also contribute to this financial stress; but who’s to blame for that?

Not to mention, the commercially twisted and painful algorithms of social-media sites such as Facebook and Twitter that try to occupy the mind space of the easy distracted and impressionable user.

Advertising that used to pay journalists’ salaries is being gobbed up by data giants like Facebook and Google.

Is print news coming to a total collapse?

Do you still value your local paper?

I’ve been aggressive in bringing attention to linking and clickbait and I make no apologies for trying to defend some degree of truth and that’s before we even start on fake news.

But why should this be so important?

Looking back at the history of newspapers in the development of colonial New Zealand you see a different story. A contribution to commerce, society, development, and men talking to each other. The conversation that was carried out through these old papers has been gradually watered down and lost to money grabbers and politicians.

While there’s a global discussion, an international diologue on the future of journalism and media, there is one for us to have here at home on what the reading public want and expect.

It was mentioned here a few days ago that it’s very quiet around here on this blog. And maybe that’s just another indication of how much men have stopped talking to each other.

Click here to cancel reply.
« How to scam the NZ immigration system if you are a woman     Update on Identity Politics »