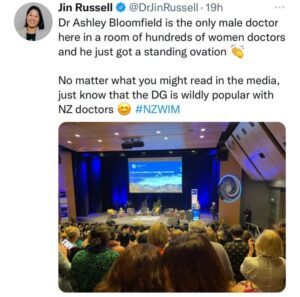 From New Zealand today, found on Twitter, as they say, and it struck me as very odd.

Before I continue, let me say, I’ve had various dealings with female doctors for over 40 years and that has never given me any cause for concern but when I see a female Doctor seemingly proud of the absence of all but one male in the room, this is no longer the case.

I’ve written before about the political invasion of the female teacher in the education sector and the excess of female lawyers in New Zealand.

Readers here are probably familiar with the extent to which university graduates have been more recently overwhelmingly female but I hadn’t been aware of any significant prejudice in the medical sector. I appear to have missed this one.

Where are all our male doctors? I have no information on gender statistics in the profession but judging by the size of the room being addressed by our departing Director General of Health, Doctor Ashley Bloomfield, we have a problem.

I’ll be blunt and say I have zero respect for the man and what he has done over the past 2 years and based on the international media I’ve seen, particularly over this week, any perceived reputation Bloomfield may have will quickly evaporate.

That leads me to ask is there something specific that has kept male doctors away from this event, and given the current international circumstances I find it somewhat disturbing that a room full of New Zealand female doctors would be giving this man a standing ovation.

You may hold a different view of that of course based on what has been available to you in terms of recent media – and in that respect I’m left asking what sort of hermit existence do female doctors lead within our medical society.

It is already being acknowledged that we have information issues within the profession and conflicts in our medical society about this.

Do we have in the end the genuine feminist that sold his soul to a feminist prime minister to bathe in the glory of his fellow feminist doctors.

But regardless of the above discussion how do we in New Zealand end up with this many female doctors in one room on one day giving the departing Director General an audience when we’re supposedly in a medical crisis with overloaded hospitals, and desperately understaffed medical facilities, struggling to cope with a medical emergency?

5 Responses to “The NZ Male Doctor”

Click here to cancel reply.
« Bob lets us know what our children are being taught.     NZ Human Rights »