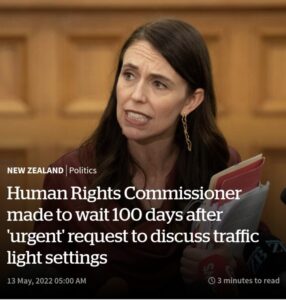 There’s plenty of posts on this site regarding the Human Rights Commission ignoring men’s issues.

It often appeared the case that the HRC was no longer an advisory group but an arm of government implementing government policy. At the point that Opposition parties began suggesting that the HRC was a derelict entity that could be disposed of, along with the reality that Labour was not likely to be the next government, we saw some behaviour modification.

With the covid court cases piling up, increasing degrees of social dislocation, and piles of contrary incoming evidence from overseas jurisdictions, it must have been obvious to the dog’s self-interest that its only course of salvation was to bite the master.

The continuation of the Traffic Light system in this case, now accompanied by Hipkins’ rebirth of the discriminatory vaccine pass, which apparently has some vague and undisclosed necessity for some undisclosed entities to exclude some undisclosed groups of people from somewhere.

Recently I have been looking at rising issues and asking the question, how is that going to impact men in New Zealand? I now regret not posting on those individual issues because of where we’ve got to now.

We may have been paying attention but we certainly haven’t been writing enough about that.

Has the tyrant done us a favour in that respect, helping the general population to experience the human rights abuses normally reserved for men only?

Human rights as such hasn’t done men in New Zealand any favours since the introduction of MMP but because of the increased disregard for our legislation by the government we have several groups calling for entrenched legislation.

Then I’m asking the question, why not changes to the legislation that allowed feminists to abuse men in the first case?

We’ve got a body count of some 20,000 men who died essentially because of the abuse of their human rights … is that still not recognised or is it rather conveniently disregarded?

Plenty to think about here.

[Link to the previous post of The HRC and gender issues. ]