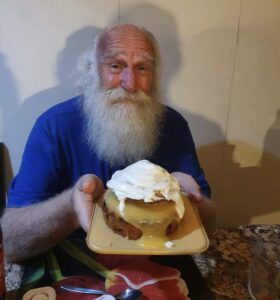 A legend has left us.

Sadly, the other Jim has now passed away. Funeral details from Javan:

There was always confusion between the two Jims, the other being Jim Bagnall who has a
Page of Remberance back in 2016.

Jim Bailey in his earlier days at a family court protest in Albert St, Auckland. 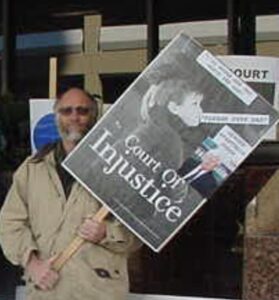 Before I say something about James A K Bailey, otherwise known as, Jim the Bailey, or JimBWarrior, a little about, “The Two Jims”.
The two Jims were both very visible characters. Both had protest vehicles and both were active protestors with a common enemy.
An essential difference though was that one was a casualty of war and the other a casualty of peace.
Jim Bagnall as a child had sat in the bomb shelters of England during the German Blitz. He knew the horror of those events in WW11 first hand … from seeing traumatised adults crying in hope to the dead bodies of locals who didn’t make it to the bomb shelter lying in the streets after a raid.
That shaped his life choices; to study as an anthropologist and the way in which he made himself available to help other people.

Jim Bailey on the other hand was a student of faith, with an intellectual understanding of their common enemy.

The two Jims were different people with different backgrounds but both equally committed to helping those traumatised people around them.

When I say a casualty of peace, Jim Bailey was like Jim Bagnall, a survivor of the war that each had been in. In peace, the conflicts can be a far away and distant place to any passerby in the street, just as the horrors of another’s war are not realised by people on the other side of the world.

They both knew what they were seeing, when they were looking at the social trauma, that can can be so invisible to people in secure lives, who have not had to experience those unwelcome intrusions to a peaceful existence.

More recently many New Zealanders have come to know the common enemy rising up amongst us. Evil as such is not a scary thing that exists in books or movies, it’s the rust and decay of society that eats away our lives and the lives of those around us. That was seen more recently as a protest at parliament.
Suddenly a mass of people realised they had to fight for an existence that might otherwise be lost.
Existing in that environment (That “River of Filth” as the protest village was called by one MP and I can say, it wasn’t because I was there) was a sense of community and combined effort.
A joint battle for personal sovereignty, various freedoms, but equally against mandates and dictates.
Essentially the same battle that had previously existed in the family court late last century had brought so many of us (our aging protestors) into the same room back then.

That’s where I met, Jim.

He was leading a campaign at the North Shore Men’s Centre, that he called, “Community Building”. His desires in that respect, to provide help for outcast men extend back well before I knew Jim.

Jim Bailey, always had a current campaign. Someone might have a picture of his protest vehicle which I think had “Equal Shared Parenting” sign-written across the sides? Regardless, that was his battle and the one he helped many others through.

The campaign that I fondly remember was his “Bothering Campaign”.
We need to bother, and bother to be bothered and go and bother those people who bother us. Not bothering, gets us no where.
And on we went. The play of words was often part of the conversation and an amusing way to invite the traumatised clients of a hostile family court into peaceful resistance.
I had previously met the man who shot his wife in an Epsom House in 1985, in the month before the incident. That’s something we all shared. An understanding of what an isolated and traumatised man might do when he encountered the nature of Patrick Mahoney’s unmuzzled dog. It took me a while to join the dots, and realise the nature of the beast. It’s that common understanding that we have that so easily makes ordinary decent men, criminals of others’ imaginations.

If I don’t explain this, you’ll never understand, “Jim the Bailey” and why some people called him a pest that bothered their peace, rather than the legend that restored their peace of mind.

We found that essence that modern men have lost.

Click here to cancel reply.
« The March of Men     Children searching for their biological family – Trying to workout what to say when they meet dad for the first time »