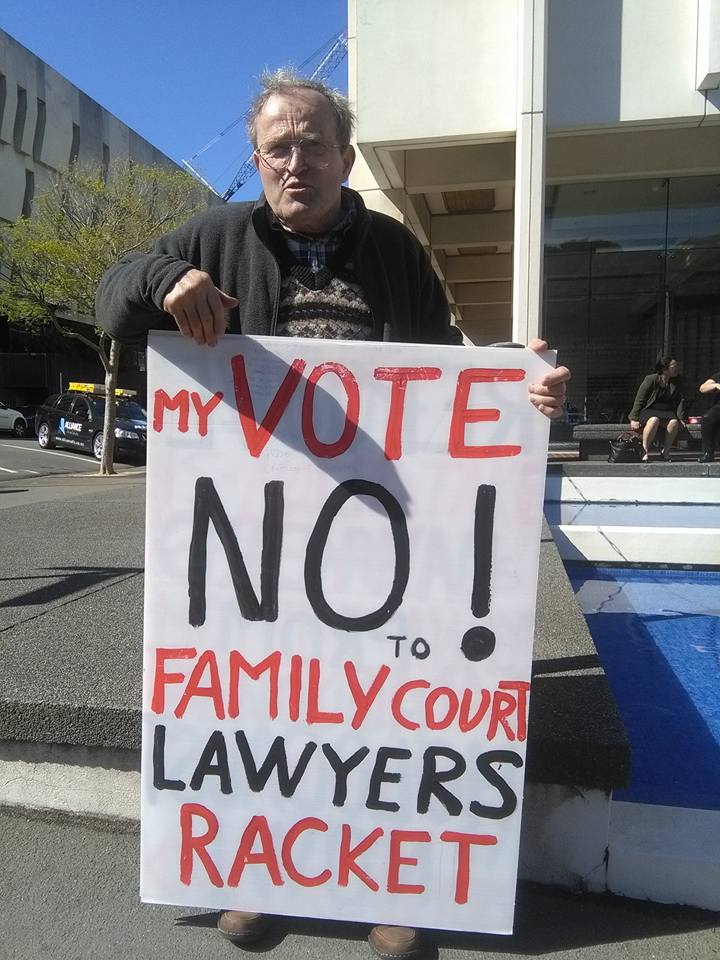 How can we honour Sid’s ultimate sacrifice? I have a few things in common with the late Mr Hanzlik,- I hate Hillman Minxs, Really hate them, You might be able to easily work on every part of them but that’s only because your going to need to. DJ reckons this is a good thing. Bullshit, I’m […]

Zdenek (Sid) Hanzlik’s suicide is a very sad event and may have been triggered by several issues but without doubt the main protagonist was the Family Court and Family Law. The slide into the abyss of despair through a life without perceived meaning for many fathers is the needless separation and complications, in regards to […]

Self Immolation at Parliament

Reports are appearing in news media, about a man setting himself on fire at Parliament. It is understood he was protesting in the grounds of parliament and had signs. You may be able to assist with further information in the comments.

The No Vote Option

As indicated in recent news articles, less people are interested in voting. I find that understandable, given the behaviour of politicians and political parties.

A huge amount of men in New Zealand are in need of community support, i.e., social housing, foodbanks, etc, etc, and I think that many men become aware, i.e., swallow the red pill, when they reach out for community support and find it non-existent or lacking.

With Helen Clark’s feminist agenda still driving misandrist anti-male policy in the Labour Party it comes as no surprise a new childless feminist, Jacinda Adern, has won control, claim the Ministry of Men’s Affairs (MoMA). MoMA is a community group because successive governments have neglected the voice and welfare of men and boys. They believe […]

Tool to Help in Your Voting

We found this tool in which you choose your views and preferences about matters and these are compared with the policies to tell you which party’s policies are most in line with your views. Seems reasonably based and quite fun: https://newzealand.isidewith.com/political-quiz

This prominent article in the NZ Herald told us that “social researcher” Natalie Thorburn “released disturbing findings” such as that “Girls just 12 years old were often groomed by boyfriends who eventually forced them into a situation where they had no option but to sell their bodies”. Ms Thorburn also claimed that “A 9-year-old girl […]

Guilty until proven innocent With 20 years jail in the balance, when will National publicly as Labour to clarify this policy.

Recollections of Father’s Day from older men might be a curiosity to younger readers. For me, being the youngest in the Family, I recall the annual presentation of a white porcelain tea cup with pictures of old cars – we’re talking Model T Fords and Chrysler convertibles, just to be clear, not old bombs. The […]

My name is Bill Clarke. I am writing a book about fatherhood and I want to interview dads. I am interested in hearing their STORIES – about their fathers, or their own story of “Dads in distress” or “Dads in success” in raising their children.

Parent but not a mother

So as a man in his mid 40’s I had pretty much resigned to the fact that I was not going to become a father. I discovered that one partner I had for a few years was proud of her 11 abortions… shortly thereafter I gently tippytoed away from the secondary school teacher in a […]

Here are a few thoughts regarding men and father issues this election.

A meeting will be held in Auckland on this day should the Ministry of Men’s Affairs choose to organise it. Concerned Men can attend the meeting and express their opinions. Let us know where this is. Venue to be advised. In the absence of a physical venue, this meeting will be held online. See you […]

Openess is the Cure

Discussions in similar jurisdictions are often worth watching. I noticed this article on the Guardian about Family Law.

Isn’t that a blow to the Banks

John Banks, known to some of us as a passionate supporter of Fathers, refused a DNA test. If you were a father, would you not want to know? Help me out here, is the estate, or pride, or something, more important than your own offspring. I’m having a bit of trouble with this one, especially […]